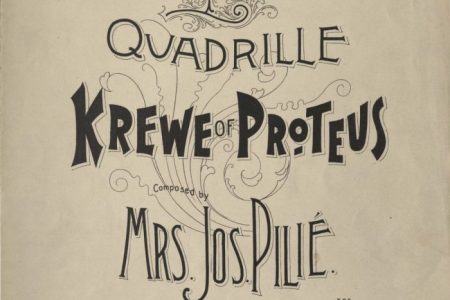 The quadrille was the most popular dance in the 18th and early 19th centuries. After 1803, New Orleans dances employed both an English quadrille (contredanse anglais), preferred by Anglo-Americans, and a French quadrille (contredanse francais), the Creoles’ dance of choice. In the English quadrille (“country dance”), men and women faced each other in two long lines, and danced most often to a reel. The French quadrille was danced in squares of four couples, and employed a man to call out the variation of figures, or dance steps. Both English and French quadrilles required a constant changing of partners, a style very different from later dances such as the waltz and the modern “animal dances” of the 1910s, in which dancers joined in couples.

In New Orleans’ transition from French to American control in the winter of 1804, ballrooms became cultural battlegrounds for Creoles and Americans, who argued over which quadrille would be danced. After one ball devolved into a violent altercation, authorities enacted a compromise in which dances alternated English quadrilles, French quadrilles, and waltzes throughout the evening. Observers of Congo Square in the early 1800s noted that creolized Africans and African Americans also danced quadrilles, which were popular among black dancers throughout the Caribbean in the 19th century. 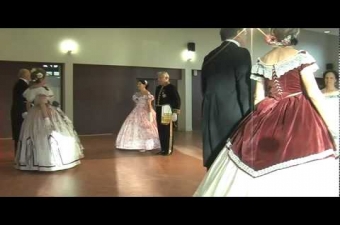 The Quadrille Francais, favored all over the Caribbean by Creoles, by Temps de Danses

The Quadrille Francais, favored all over the Caribbean by Creoles, by Temps de Danses