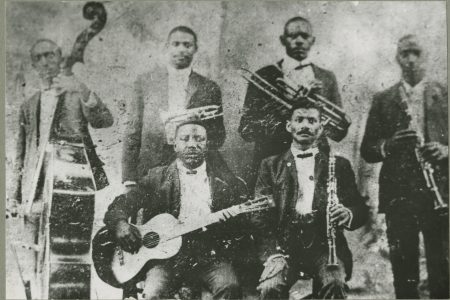 Sources and Styles of Early Jazz

Early New Orleans jazz bands borrowed from a wide variety of music genres and blended them into a distinct sound that became immediately popular. The mixing of diverse musical influences into the style known as jazz has long led observers to characterize early New Orleans jazz as a “gumbo” of musical idioms. Most New Orleans musicians who performed early jazz claimed that the style was called ragtime locally, but gained the name jazz when it arrived in Chicago in the mid-1910s.

Many songs associated with New Orleans jazz employ a three-part song structure that is a characteristic of ragtime. This song structure is composed of three melody strains (often in the form of A/A/B/B/C/A), in which A & B parts were a melodic theme and variation, and the C part (known as the trio) provided a greater melodic variation for contrast before returning to the A for a final statement.

Early jazz bands adopted several songs that were part of the ragtime or marching band repertoire of the 1890s and 1900s, such as “Over the Waves,” “Panama,” “High Society,” and “Maryland My Maryland,” all of which used a three-part structure. In the early years of jazz, New Orleans musicians employed the same structure in original compositions, as Jelly Roll Morton did in “Original Jelly Roll Blues” and the Original Dixieland Jazz Band did in “Tiger Rag.”

In the first decade of the 20th century, most classic ragtime compositions used a 2/4 rhythm. Early New Orleans jazz, was distinguished by its 4/4 rhythm, which came from the Foxtrot dance. The transition to the Foxtrot reflected the modern emergence and popularity of the “animal dances” in the mid-1910s (Bunny Hug/Turkey Trot/Grizzly Bear, etc.), and the general move away from older 2/4 dance rhythms.

Blues was a major influence on early jazz style and composition. The blues style involved playing blue notes (minor keys/pentatonic blues scale) and also joining notes through melismatic (sliding) runs, both of which were hallmarks of many early jazz melodies and solos. Buddy Bolden was known for improvising extended blues solos on his cornet, and many of the earliest ragtime/jazz musicians were expected to be proficient at improvising in a bluesy style.

Blues compositions were also prevalent in the early development of jazz. Within the blues idiom, compositions generally followed the 12-bar blues chord structure (which used the I/IV/V chords). But there were many variations, which added other minor or diminished chords (for example the ii, vi and diminished #IV chords). Buddy Bolden’s Blues, also known as “I Thought I Heard Buddy Bolden Say,” is an example of this type of blues, which offered a variation of the standard 12-bar, three-chord blues structure.

Although early historians associated New Orleans jazz with Storyville and prostitution, the African American church and religious music had a profound impact on its development. In terms of style, music from the black church had an impact on many of the great Uptown musicians, who attended the Baptist, African Methodist Episcopal, or Pentecostal churches, where spiritual singing, melodies, and rhythms were exuberant. Jubilee spirituals were accompanied by an upbeat, hand-clapping rhythm, and many jazz musicians attended churches where Jubilees were performed. According to early jazz musicians, Buddy Bolden was known for integrating Baptist church rhythms and syncopations into his distinct style.

The early jazz repertoire also adopted many spiritual songs because many early ragtime/jazz musicians performed in brass bands that played funerals, and the so-called “jazz funeral” was closely associated with the development of the music. Hence, songs like “Just a Closer Walk with Thee,” “Over in Gloryland,” “Just A Little While to Stay Here,” and “When the Saints Go Marching In” all bridged the worlds of brass bands and early jazz bands.

Jelly Roll Morton claimed famously that New Orleans jazz had a “Spanish tinge,” referring to the Afro-Latin/Caribbean rhythms of some early compositions. The left-hand piano bass played by Morton (in “Spanish Tinge,” “Mamanita,” and “Spanish Swat,” for example) is the four-note habanera rhythm, named after the city of Havana, Cuba. This rhythm is the basis for much Latin American and Caribbean music, such as the Argentine tango, the Mexican bolero, the Dominican mambo, and modern reggaeton.

The rhythm originated in central Africa and spread through the African diaspora in the western hemisphere. In New Orleans the rhythm is associated with the music at Congo Square, where it was referred to as the bamboula, which is historically identified with the Bambara ethnic group. In the 1840s, New Orleans-born composer Louis Moreau Gottschalk published Bamboula, Dance des Negres Op. 2, which used the rhythm in a melody and variation composition. The persistence of the rhythm in New Orleans helped define the city’s distinctive musical style. The tresillo, which is a simplified three-note variation of the habanera/bamboula, inspired some of the bass lines and rhythms in New Orleans rhythm and blues and rock ‘n’ roll in the 1950s and 1960s. Musicians such as Professor Longhair, Dr. John and others continued this association of the city with the rhythm throughout the 20th century.

The songs of vaudeville influenced the repertoire of early New Orleans jazz. Vaudeville theater was essentially a variety show combining skits, comedy, minstrelsy, and musical performance, and it was the most popular form of theater entertainment in the early 1900s and 1910s. Many songs played in vaudeville theater were Tin Pan Alley-style songs, performed by early ragtime/jazz bands to appeal to popular tastes. New Orleans jazz standards that originated in vaudeville include “Bill Bailey,” “Darktown Strutters Ball,” and “Some of These Days.”

Many musicians associated with the development of New Orleans jazz also performed in vaudeville theater. Louis Armstrong won a talent contest at the Iroquois Theater in the mid-1910s by performing a vaudeville skit in “white-face” after he dipped his face in flour. Musicians/publishers A.J. Piron and Clarence Williams organized their own vaudeville troupe, which included guitarist/banjoist Johnny St. Cyr. Piron and Williams, as well as pianist Jelly Roll Morton, toured with national vaudeville troupes during the late 1910s.

The music associated with marching bands and brass bands became integral to the New Orleans ragtime/jazz repertoire. In the 1900s and 1910s, groups such as the Original Dixieland Jazz Band, the Sam Morgan Band, the Original Tuxedo Jazz Orchestra, and the Robichaux and Piron bands, were comprised of musicians that also played in brass bands. Naturally, some of the brass band songs were incorporated into early jazz compositions.

John Philip Sousa’s compositions were popular nationally at the turn of the century, and especially in New Orleans, where processions were integrated into the fabric of the city’s celebrations and events. Hence Sousa’s “Washington Post March,” “Stars and Stripes Forever,” and “Under the Double Eagle” were adapted to a ragtime/jazz dance rhythm in many bands’ repertoires. “Over the Waves,” which was originally a 3/4 time waltz associated with the Mexican National Band in New Orleans in the late 1800s, was adopted by jazz bands in the 1910s but in 4/4 time, reflecting the modern dance sensibilities of their audiences. In terms of composition, Nick LaRocca claimed that he borrowed the chord progression in “Under the Double Eagle” as inspiration for “Tiger Rag.” This same chord progression can be found in traditional jazz standard “Bill Bailey” and Paul Barbarin’s “Bourbon Street Parade,” which was composed in the 1950s.

New Orleans jazz integrates several important musical influences from West and Central Africa, where the majority of enslaved Africans in New Orleans came from during the colonial period. While some claim that Congo Square is the birthplace of jazz, it ceased to exist as a music performance site in the mid-1800s, so it is not possible to link it directly to the development of jazz in the 1910s. The African music performed at Congo Square certainly influenced the musical characteristics of early jazz, though, many of which likely survived in local African American music performances for the remainder of the 19th century.

The habanera/bamboula rhythm associated with Congo Square was present in some early jazz compositions. While it is usually associated with Latin American music, in New Orleans it remained an important dance rhythm in African American performance. The polyphonic rhythms associated with African drum orchestras are likely the inspiration for the polyphonic melodies that characterize the collective improvisation within the “front line” in early New Orleans jazz. Likewise, the vocal aspects of African drumming, in which drums are known to “talk” or represent different vocal sounds, were likely a major influence in the use of vocalized instrumentation in early jazz. New Orleans horn players were known for using a wide variety of affects to make their horns “talk.” White musicians, such as those in the Original Dixieland Jazz Band, came to use this technique, as evident in their imitations of various barnyard animal calls in “Livery Stable Blues.”

Although jazz is often characterized as an ear-based improvisational music, formal western music theory, instrumentation, arrangements and melodies were incorporated into early jazz style and composition. Many Creole and Italian-American musicians were formally trained and read competently. As jazz developed in the 1900s and 1910s, schooled players such as Manuel Manetta and James Humphrey instructed many of their peers. Manetta played in bands with self-taught musicians, and often taught them formal musical skills and reading. Among the first generation of jazz musicians, Jelly Roll Morton and Sidney Bechet studied music formally, but abandoned the practice to embrace blues and ragtime-based improvisational music. Morton was inspired to take up the piano after attending a recital at the French Opera House, but he was most influenced by the self-taught ragtime pianists he knew in the bars and saloons around Storyville.