To visit this site, enter Louis Armstrong Park at 801 N Rampart Street, proceed past the sculptures, past the Municipal Auditorium to the left, and past the Mahalia Jackson Theater for the Performing Arts to the right. The building stood on the far side of what it is now a parking lot.

The Gypsy Tea Room was one of the premiere Black nightclubs in New Orleans in the 1930s and 40s. It attracted a swanky crowd, including visiting celebrities like Cab Calloway and heavyweight champ Joe Louis. They rubbed elbows with local doctors and lawyers in a room decorated in a starry night motif, with lit candles suspended from the ceiling. (The club’s name was inspired by a nationwide Gypsy Tea Room fad in the Depression era—Treme’s own Louis Prima was one of several artists to record a tune called “In a Little Gypsy Tea Room” in 1935.)

The music here was top shelf. Before making rock and roll history with Fats Domino, a young Dave Bartholomew led his 10-piece orchestra in one of its first gigs here. Harold “Duke” Dejan (1909-2002), best remembered as the leader of the Olympia Brass Band, appeared with Kid Rena before fronting his own group, which became a fixture at the Gypsy Tea Room in the 30s. Dejan’s band often performed in “battles” with the best big bands in the city, including those led by Sidney Desvigne and William Houston, Sr. Dejan remembered:

They had girls that used to dress as gypsies and sing a little but after we went in with the band they got a whole floor show in there that we played. It was a beautiful place, a big bar in front and a side door for the club. They had tables all over the floor and a bandstand for us. My wife, Rose, was a gypsy.

Some of the vaudeville-style shows were produced by the bluesman Pleasant Joseph, better known as Cousin Joe or Smiling Joe (1907-1989), who also played guitar, sang, and danced. He and his companion Eva Soule, a dancer herself, were living above the Gypsy Tea Room in 1937 when an explosion in the adjacent grocery store shot flames into the barroom. Fortunately, everyone escaped with their lives, though Cousin Joe and Soule lost all of their possessions in the fire.

The club was rebuilt, and, as big bands fell out of favor in the 40s, the New Gypsy Tea Room booked smaller combos, including a trio with two local R&B heros, barrelhouse pianist “Tuts” Washington and blues shouter Smiley Lewis. The new room also hosted recording sessions, notably for clarinetist George Lewis, who enjoyed a late-career resurgence in the traditional jazz revival of the 1940s.

The club was full of characters. Patsy Vidalia, the female impersonator who famously emceed at the Dew Drop Inn, premiered her act at the Gypsy Tea Room. Rock and Roll Hall of Fame drummer Earl Palmer, who grew up in the neighborhood, recalled the scene: “Buddy Tureaud was the emcee and spoke the worst English in the world: ‘Y’all get ready, we going bring y’all so-and-so, boy shit can she sing!’” Palmer also remembered fights onstage between husband and wife team Billie and DeDe Pierce, who, like Dejan, became regulars at Preservation Hall later in their lives.

Beyond its bandstand, the Gypsy Tea Room was integral to the Treme’s parading traditions, serving as a stop for the Zulu parade on Mardi Gras Day, for Mardi Gras Indians on Carnival and St. Joseph’s Night, and as a venue for social aid and pleasure club events.

The New Gypsy Tea Room had closed and the building housed a different club in the 1960s when the city acquired and demolished it to make way for a “cultural center.” After that project proved to be a boondoggle, the cleared land was developed as Louis Armstrong Park. 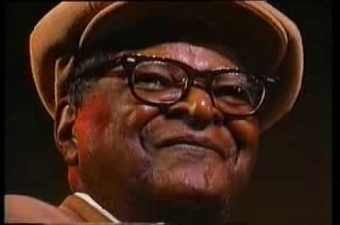 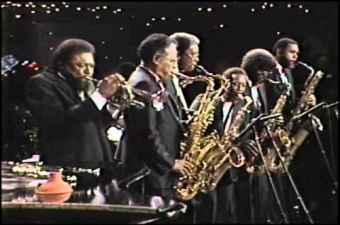 Video from Rien B. 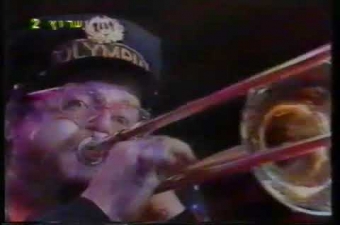 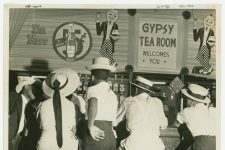 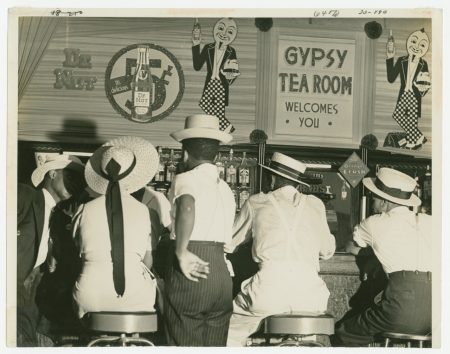 The Gypsy Tea Room ca. 1937, the year it was gutted by a fire.
Courtesy of the Historic New Orleans Collection. Photo by Charles Genella. 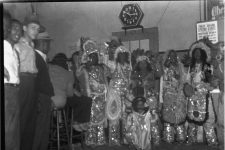 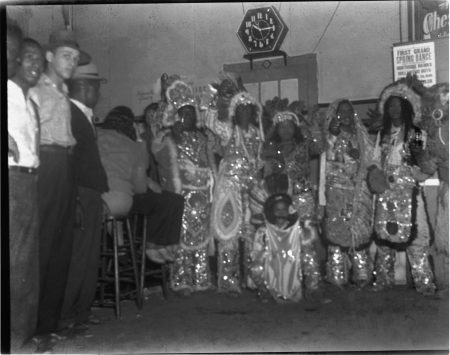 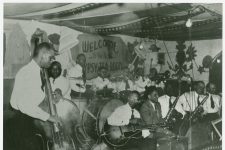 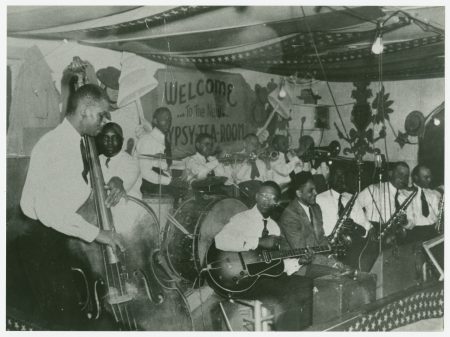 Sidney Desvigne's band--one of the best in town--at the New Gypsy Tea Room in 1941.
Courtesy of The William Russell Jazz Collection at The Historic New Orleans Collection, acquisition made possible by the Clarisse Claiborne Grima Fund. Photo by William Russell. 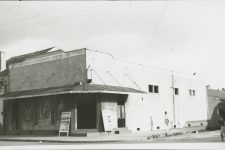 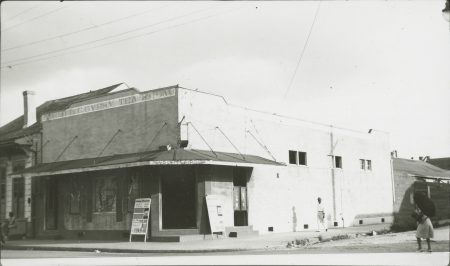 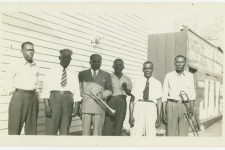 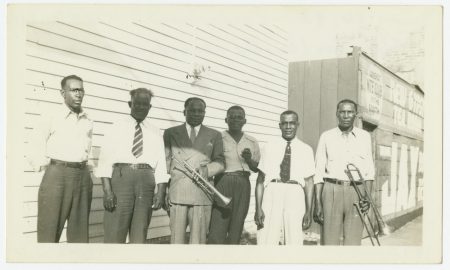 From 1943, George Lewis and His New Orleans Stompers outside the Gypsy Tea Room, where they were recording.
Courtesy of The William Russell Jazz Collection at The Historic New Orleans Collection, acquisition made possible by the Clarisse Claiborne Grima Fund. 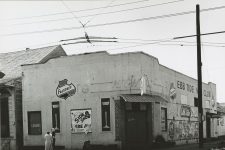 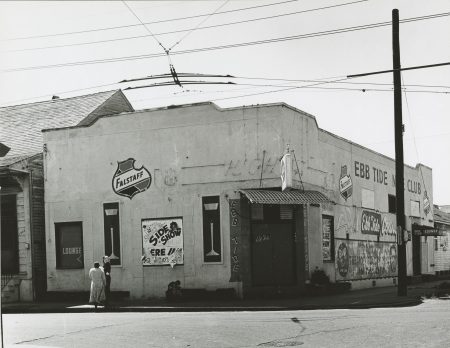