Yvonne Fasnacht, known as Miss Dixie, said she didn’t conceive of Dixie’s Bar of Music as a gay bar. By design or not, today it is considered among the most important gay bars in American history. A generation before the Stonewall Riots, it served as a safe space for the gay community in New Orleans and attracted visitors from around the country.

Miss Dixie opened the club with her sister, Miss Irma, in 1939 (its original location was on St. Charles Avenue). A clarinetist and bandleader, Miss Dixie regularly provided the entertainment herself. Her house band included a pianist named Dorothy Sloop, whom Fasnacht called Sloopy—the nickname reportedly went on to inspire the number one hit song “Hang On Sloopy.”

As a child in the 1920s, Fasnacht studied music and the arts at Francis T. Nicholls School in New Orleans alongside the Boswell Sisters, who went on to national fame as a vocal group. Before opening her club, she toured the country with her all-female jazz band called the Southland Rhythm Girls.

The author Lyle Saxon, a regular at Dixie’s Bar of Music, connected the Fasnachts to the painter Xavier Gonzalez, who produced a 29-foot long painting for the barroom in the 40s. It depicted dozens of musicians and artists, from Louis Prima to Lena Horne to Salvador Dali. Visiting celebrities added their signatures to it over the years. It is now on display on the second floor of the New Orleans Jazz Museum at the Old U.S. Mint.

In 1949, Dixie’s moved here, to what was at the time a quiet block of Bourbon Street, and the Fasnacht sisters took up residence above the bar. In the heart of the French Quarter, the clientele included assorted bohemians and artists like the photographer Jack Robinson, who documented the community that formed around the club. Local bigwigs including businessman Clay Shaw were patrons, as were Tennessee Williams, Truman Capote, and Gore Vidal.

The police raids that dogged establishments frequented by gay customers were less disruptive at Dixie’s than elsewhere. Fasnacht attributed this to her insistence on maintaining an atmosphere suitable for the “cufflink set.” Her political savvy and her family’s longstanding relationships in the city’s bar business probably didn’t hurt.

After closing Dixie’s in 1964 the Fasnacht sisters moved a few blocks down Bourbon Street, where they continued the lavish Mardi Gras celebrations that they’d become known for at the bar. 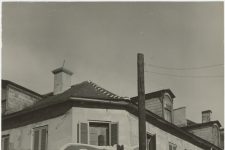 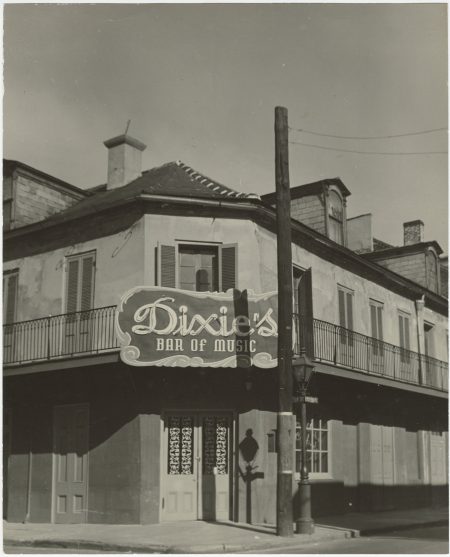 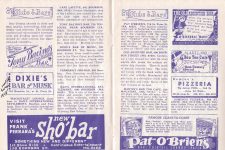 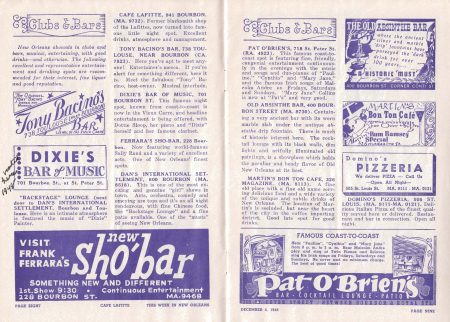 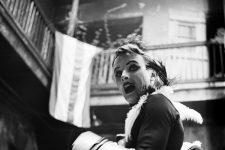 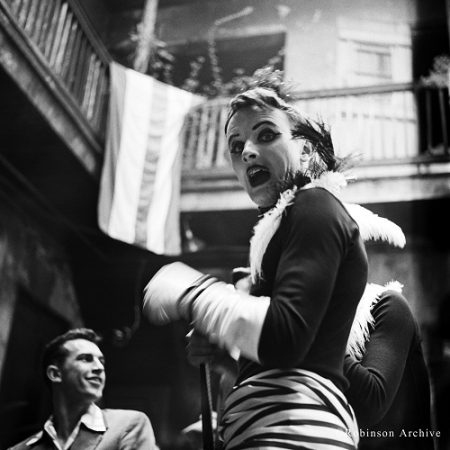 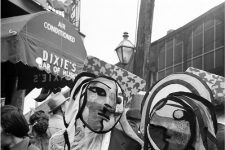 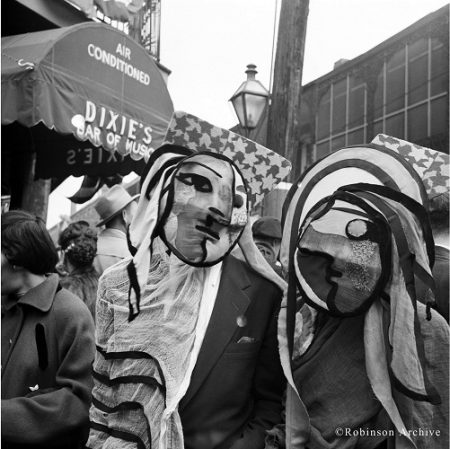 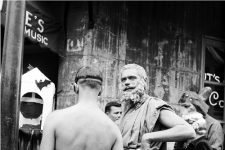 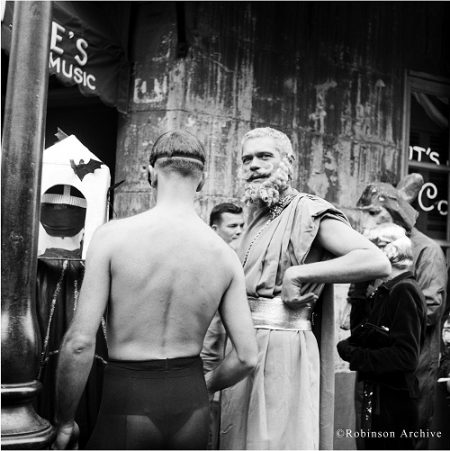 Outside Dixie's Bar of Music on Mardi Gras, ca. 1952-55. The man in the toga is Clay Shaw, whom District Attorney Jim Garrison tried as a conspirator in the assassination of John F. Kennedy. Shaw was acquitted, but never fully recovered from the ordeal.
Courtesy of the Jack Robinson Archive. © Robinson Archive. 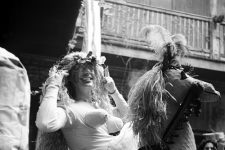 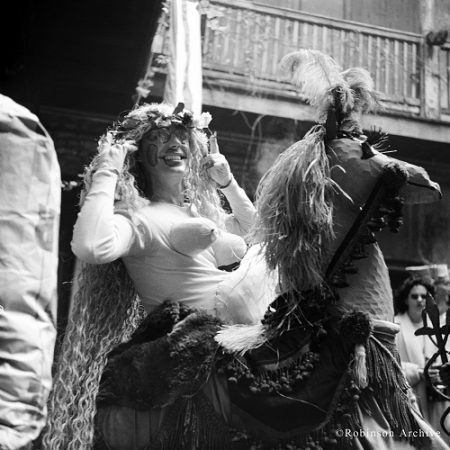 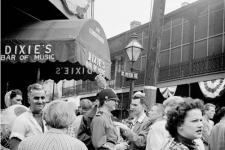 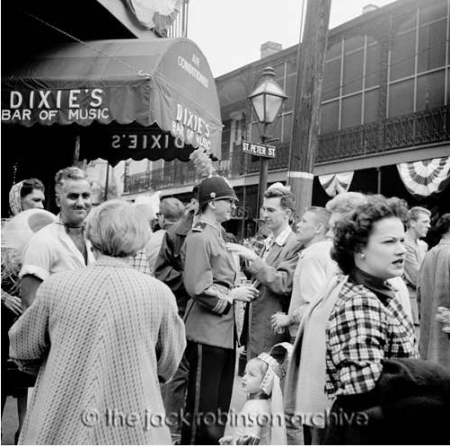 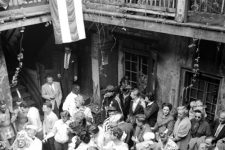 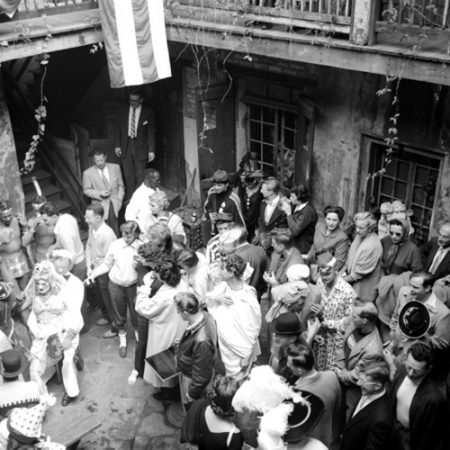 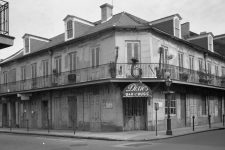 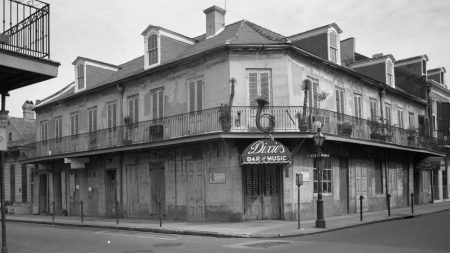 Dixie's Bar of Music in 1963, the year before it closed.
The Collins C. Diboll Vieux Carré Digital Survey, courtesy of the Historic New Orleans Collection. Photo by Dan S. Leyrer. 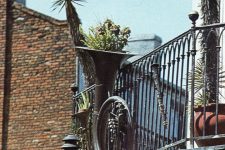 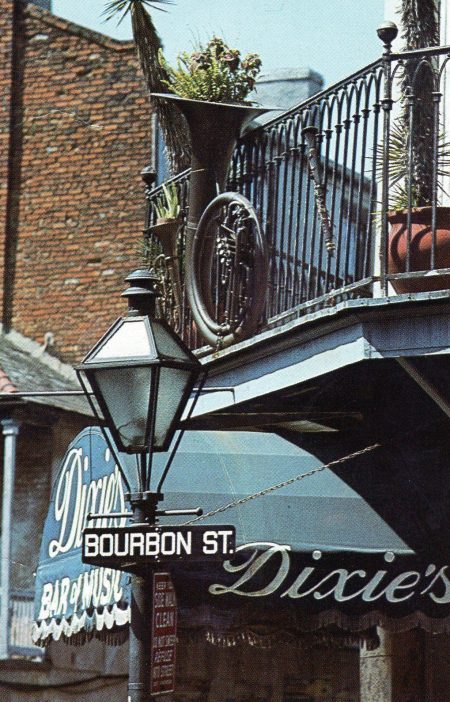 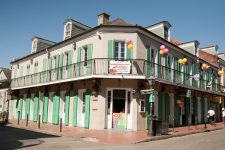 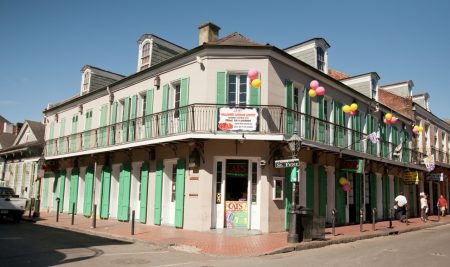 One wonders what Gore Vidal--a patron of Dixie's Bar of Music--would have to say about the Cat's Meow, the karaoke bar now at 701 Bourbon Street.
Courtesy of the Collins C. Diboll Vieux Carre Digital Survey. Photo by John Watson Riley.

"Fat Tuesday at Dixie's" by Dr. Sarah Wilkerson-Freeman Southern Cultures Vol. 12, No. 1 Spring 2006
A close reading of Dixie's through the photographs of Jack Robinson
"Yvonne 'Miss Dixie' Fasnacht, bar proprietor, dies at age 101," by John Pope The Times-Picayune November 16th, 2011
Further reading about Miss Dixie and the bar
"In the Kingdom of Queens: The Royal Krewe of Yuga and the Birth of Gay Carnival" by Howard Philips Smith New Orleans Magazine January 2015
On the role of Dixie's in gay Mardi Gras
"701 Bourbon Street" from liugeauxallin.tumblr.com
A deep dive in the building's history inspired by its current tenant, the Cat's Meow karaoke bar
Today in New Orleans History: Sloopy is Born
On the tie that binds Dixie's and the No. 1 hit "Hang on Sloopy"
Unveiling the Muse: The Lost History of Gay Carnival in New Orleans by Howard Philips Smith
Buy the book
Bourbon Street: A History by Richard Campanella
Buy the book
The French Quarter That Was Produced and narrated by Peggy Scott Laborde
Buy the DVD
The Nightlife That Was Produced and narrated by Peggy Scott Laborde
Buy the DVD
Loading...