If you’re among the hundreds of thousands of French Quarter Fest attendees, we invite you to keep your phone handy and nerd out with us. When you head to the New Orleans Jazz Museum at the Mint, you can stop by the former studio where Ernie K-Doe recorded “Mother-in-Law.” The festival stage in Jackson Square is just a few blocks from the former Ivanhoe, which helped launch the Meters and the Radiators, and the site of Poodle’s Patio, where Mac Rebennack (before he was Dr. John) played the organ behind exotic dancers.

One of French Quarter Fest’s specialties is putting traditional jazz front and center on Bourbon Street. Between sets you can trace the midcentury trad jazz revival on the strip, from the Paddock Lounge, where Sweet Emma got the idea to wear bells on her garters, to the Famous Door, where Sharkey Bonano cut up with Pork Chop and Kidney Stew. 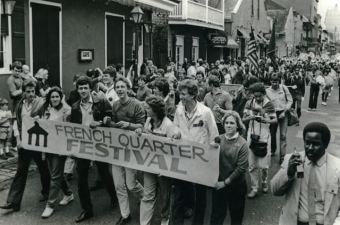