Chances are you’ve been listening to Earl Palmer your whole life. He plays drums on “Tutti Frutti” by Little Richard, “You Send Me” by Sam Cooke, “You’ve Lost That Lovin’ Feelin'” by the Righteous Brothers, “River Deep—Mountain High ” by Ike and Tina Turner, the theme songs from “Mission Impossible” and “The Brady Bunch,” and literally countless other records. He was a first-call studio musician for decades, racking up more sessions than anyone, himself included, could keep track of.

Though he always saw himself as a jazz drummer, Palmer is revered for establishing the backbeat that would define rock and roll—a strong knock on beats 2 and 4. He recalled clapping on these beats as a child following brass band drummers as they paraded through Treme, where he grew up. His home here, near the corner of North Claiborne and Dumaine, where neighborhood characters hung out by a barbershop and shoeshine stand, was surrounded by music (jazz icon Danny Barker called it a “swinging” corner).

Palmer was a professional entertainer by age 5, when his mother and aunt, both dancers, brought him on stage at the Lyric Theater. (His biological father was probably the pianist Walter “Fats” Pichon.) Palmer danced with his family on the Black vaudeville circuit, sleeping in the luggage rack of their tour bus. When he was home, he tap-danced for tips on Bourbon Street and beat on a drum he made out of an orange crate and a cymbal fashioned from a lard can.

After serving in the army, Palmer enrolled in the Grunewald School of Music on the GI Bill. He was an excellent drummer when he arrived, and one of the best in town when he left, quickly earning a seat in bandleader Dave Bartholomew’s rhythm and blues outfit. In 1949, members of that prestigious group, including Palmer, became the house band at the J&M Recording Studio.

In the studio, beginning with Fats Domino’s “The Fat Man” and culminating in Little Richard’s “Lucille” in 1957, Palmer “rewrote the book on rhythm in popular music” in the estimation of biographer Tony Scherman. Palmer would have rather played something more sophisticated, but these sessions paid his bills. They were a bonanza for record executives, as white teenagers across the country discovered what Palmer had long known: that a thumping backbeat puts bodies in motion.

The Crescent City roots of the rock and roll beat are easy to trace in the Fats Domino song “I’m Walkin’.” The rhythm comes up from Palmer’s feet, with a second line-style bass drum intro leading to a rap on the snare (as demonstrated in this video). Though New Orleans had shaped him, Palmer had to leave town to live the life he wanted: Los Angeles promised higher wages, status, and, unlike the Jim Crow South, a chance to live with the woman he loved, who was white.

In California, Palmer’s sight-reading acumen and versatility made him a studio ace. He drummed in Phil Spector’s wall of sound and Motown’s West Coast productions. After years of playing with everyone from Frank Sinatra to the Beach Boys to Dizzy Gillespie to Neil Young, he earned the unofficial title of “Most Recorded Drummer in History.” In 2000 he was in the first class of sidemen inducted into the Rock and Roll Hall of Fame. 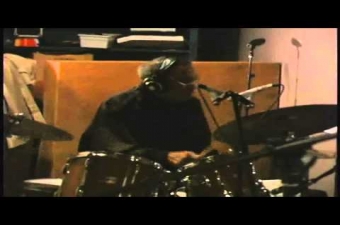 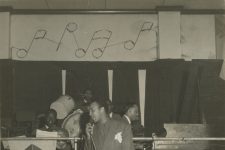 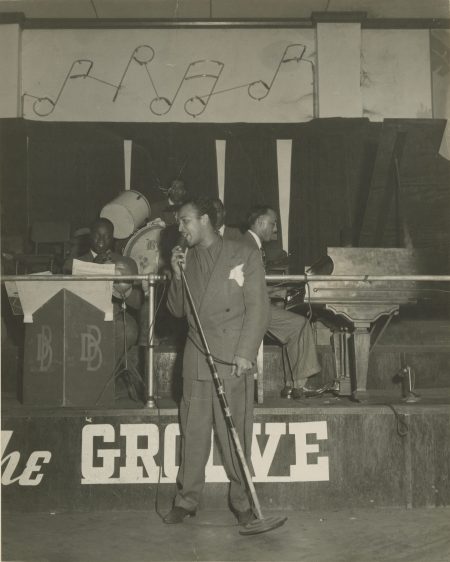 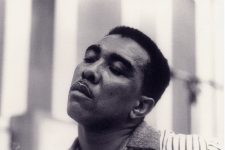 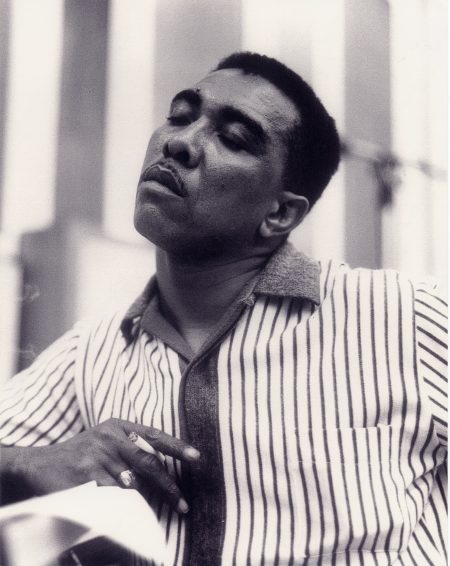 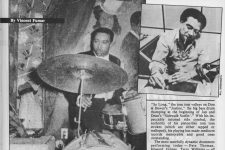 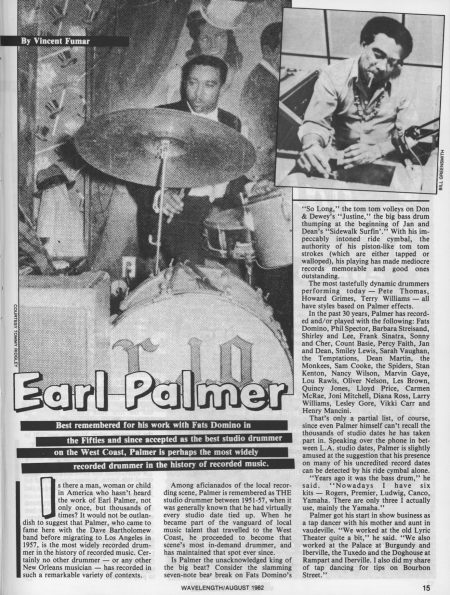 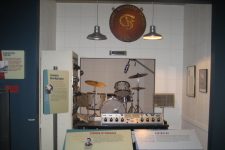 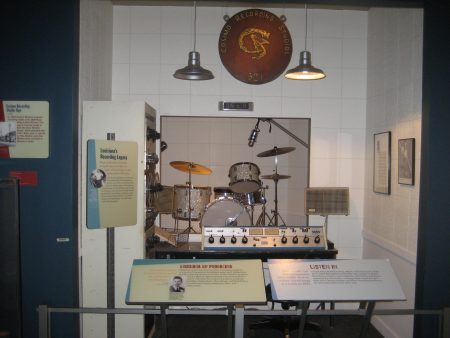 From the Louisiana State Museum in Baton Rouge, an exhibit including Earl Palmer's drum kit and the sign that hung at Cosimo Recording Studio at 521 Governor Nicholls Street.
Wikimedia Commons. Photo by Infrogmation.