In the early 1900s, a Jewish family, the Karnofskys, lived on the second story of a brick building at 427 South Rampart Street and ran a tailor shop on the ground floor. They hired a youngster from the neighborhood, Louis Armstrong, to work on junk and coal wagons with their sons, and, despite prevailing white attitudes about segregation, often had him upstairs for dinner.

Armstrong developed a close relationship with the family, learning a song called “Russian Lullaby” from Tillie Karnofsky, who sang it to her baby. As he remembered:

My first Jewish meal was at the age of seven. I liked the Jewish food very much. Every time we would come in late on the little wagon from buying old rags and bones, when they would be having ‘supper’ they would fix a plate of food for me, saying you’ve worked, might as well eat here with us.

The Karnofskys praised Armstrong’s musical talent. Besides his pitch-perfect singing, he blew a tin horn on the junk wagon to attract customers. He recalled:

After blowing the tin horn—so long—I wondered how would I do blowing a real horn—a cornet was what I had in mind. Sure enough, I saw a little cornet in a pawn shop window—five dollars—my luck was just right. With the Karnofskys loaning me on my salary—I saved 50 cents a week, and bought the horn. All dirty—but was soon pretty to me.

In the 1920s, Morris Karnofsky, one of the sons Armstrong worked with, opened a music store in the space where the tailor shop had been on South Rampart Street. Morris Music, which eventually moved a few blocks away, was the first place in New Orleans to sell jazz records. Armstrong visited on his many returns to the city after he moved away in 1921.

The building was on the National Register of Historic Places. Considering it alongside the Little Gem Saloon, the Iroquois Theater, and the Eagle Saloon, John Hasse, curator of American Music at the Smithsonian Institution, said “There is probably no other block in America with buildings bearing so much significance to the history of our country’s great art form, jazz.”

After decades of neglect, the Karnofsky building was in a weakened condition when Hurricane Ida came ashore in 2021. Despite additional braces added by a new owner in 2019, the structure was destroyed in the storm. The image of its ruins was widely disseminated and quickly became a symbol of the hurricane’s wrath.

Churches here tended to be Protestant, with emotive spirituals and hymns in their services that reverberated through the neighborhood. To the ministers’ chagrin this area included Black Storyville, the red light district for those barred from the whites-only bordellos and gambling houses just across Canal Street. This traffic fueled some social ills; it also helped attract audiences for working musicians.

In 1938, the WPA City Guide called South Rampart Street “The Harlem of New Orleans.” It was full of music, from barrelhouse piano players like Tuts Washington to big bands like Papa Celestin’s. The street itself was a venue, with benevolent societies and social clubs parading with brass bands, and, on Carnival, the Zulu parade, Baby Dolls, and chanting bands of Black Masking Indians.

As musical tastes turned toward rhythm and blues in the 1950s, South Rampart Street went the way of other Black inner city neighborhoods in the age of urban renewal. Whole blocks were demolished and redeveloped, paving the way for a new city hall and today’s Central Business District. 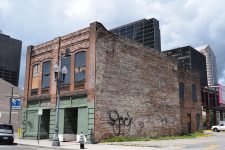 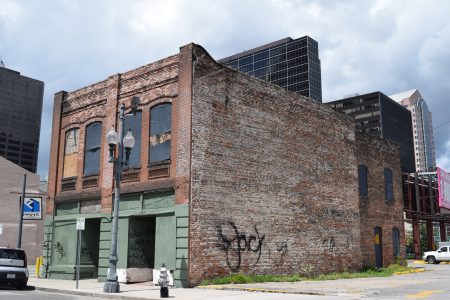 The Karnofsky building in 2017.
Photo by Jan Gilbert 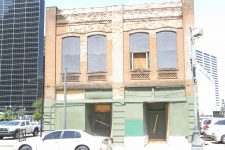 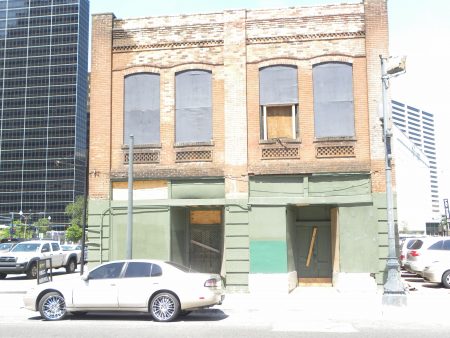 The Karnofsky building in 2017.
Photo by Kevin McCaffrey. 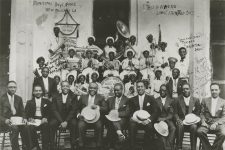 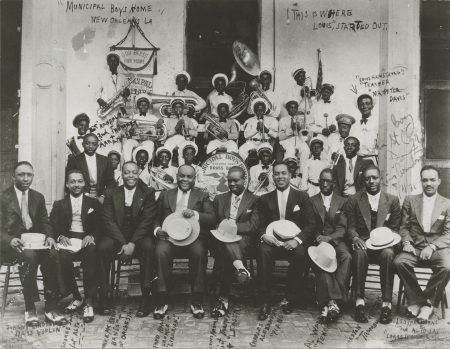 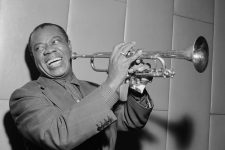 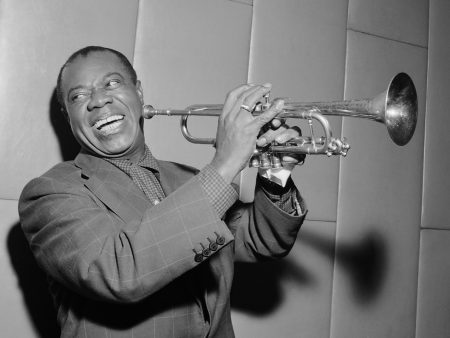 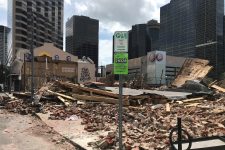 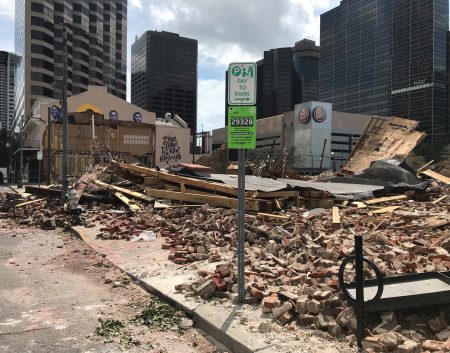 The ruins of the Karnofsky building on August 30, 2021, the day after it fell in Hurricane Ida.
Courtesy of Jordan Hirsch. Photo by Jordan Hirsch.