Bring ’em to the Dome: Music History by the Superdome Tour

This tour includes music history sites you’re likely to walk past on your way in and out of the Superdome. While the stadium itself has a rich history, having hosted concerts by the biggest touring artists in the world since opening in 1975, the nearby Central Business District sits what was once a Black neighborhood crucial to the development of jazz and rhythm and blues, and still has a few landmarks standing from those eras.

Louis Armstrong grew up in the area near City Hall in the early 1900s, when it was known as Back o’ Town. As a child he attended the Fisk School, worked for the Karnofsky family, and won a talent contest at the Iroquois Theater, all within a couple blocks of each other.

A strip of businesses around South Rampart Street included music venues like the Funky Butt Hall and the  Eagle Saloon, where some of the earliest jazz performances took place, and other clubs where jazz pioneers hung out even when they weren’t performing, like the Red Onion and Little Gem Saloon.

In the 1930s, this community fostered the growth of big bands, like the one led by Clyde Kerr, Sr., who attended McDonogh #35 High School and performed at the nearby Astoria Hotel. Up the street, Morris Music was the first record store to sell jazz records in the city where it was born.

By the 1940s, the Grunewald School of Music groomed a new generations of artists that would help define the sound of rhythm and blues, in New Orleans and beyond. The Bop Shop helped bring the R&B recording industry to the city, and the legacy continued at the One Stop Record Shop, a haven for songwriters, and, later, Jazz City Studio, where funk legends The Meters first came together. 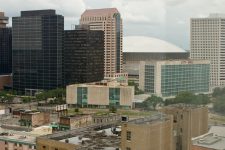 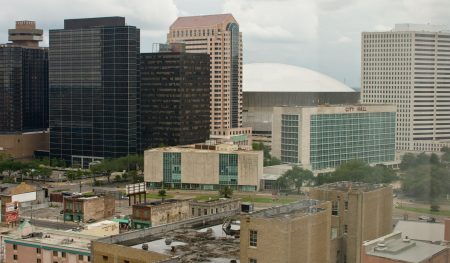 The Superdome, City Hall, and the jazz landmarks of the 400 block of South Rampart Street in New Orleans' Central Business District, seen in 2008.
Courtesy of Creative Commons. Photo by Dave Shea.
Loading...