Joe Torregano was a toddler living around the corner from John McDonogh High School in 1954 when the U.S. Supreme Court ruled segregated schools were unconstitutional. John Mac (as the school is commonly known) was exclusively white, and resisted desegregation until Torregano was old enough to enroll in 1966, and be among the first Black members of the school band. In the book Talk That Music Talk by Bruce Sunpie Barnes and Rachel Breunlin, Torregano recalls how quickly white people abandoned the school once Black students were allowed in: “By my senior year, we had only two white kids left in the band. Our band director had left as well.”

It was a dramatic shift. This facility on Esplanade Avenue opened in 1912 as a high school for girls. In the 1920s a student chorus sang classical pieces on the radio, and an orchestra performed in the auditorium. When John Mac went co-ed the orchestra expanded and a marching band—the Trojans—starting parading for Carnival. In the 1970s a new band director, Edward Sanders, built the program into one of the most dynamic in the city. By the early 80s John Mac was a high-stepping show band with 175 pieces playing drum cadences with a New Orleans accent.

At the same time, in no small part due to school desegregation, the neighborhood around John Mac was becoming nearly all Black. It was at the center of a brass band revival instigated by a cohort of young musicians from the Fairview Baptist Church Band, including Torregano on clarinet. John Mac’s marching band produced drummers and horn players that filled the ranks of young brass bands. Alumni included Rickey and Dwayne Paulin, sons of traditional jazz patriarch Ernest “Doc” Paulin, and trumpeter James Andrews, who was already fronting his own band as a teenager—he’d become a leader in the brass band community in the 90s (and mentor to his brother Troy Andrews, better known as Trombone Shorty.)

Torregano, while continuing to gig in brass bands, returned to John Mac as band director in 1987, modeling himself after his former teacher at Bell Junior High School, Donald Richardson. Torregano groomed a new generation of brass band musicians here, including trombonists Tyrus Chapman and Gregory Veals, and Derrick Tabb, who’d win a Grammy as the snare drummer in the Rebirth Brass Band. Jeffrey Herbert, who played trombone in the Pin Stripe Brass Band, took over as band director in the mid-90s.

Some notable hip hop artists emerged from John Mac, too. In the 1980s a group of students used to rap in the boys’ bathroom at lunchtime, where they could beat on a hollow spot in the wall to get a deep bass sound. One day Rick Bickham jumped in the circle with a freestyle that started him on path to rapping as Ricky B. In 1994 he recorded two New Orleans classics, “Shake It Fo Ya Hood” and “Yall Holla.” His style fused brass band elements with bounce, the city’s signature hip hop sound—in 1995 he cut “Let’s Go Gitt’em” with members of the John Mac marching band.

In the late 90s Adam Pigott played trumpet in the marching band, but after school he’d go home and make beats on hand-me-down DJ equipment and a computer he bought. As BlaqNmilD, he’d become a producer and behind-the-scenes force in New Orleans hip hop, working with seemingly every rapper in town, from Master P to Lil Wayne to Big Freedia. His reputation for bounce beats landed him a gig to produce superstar Drake’s Number One hit “In My Feelings” in 2018.

After Hurricane Katrina John Mac was one of many Orleans Parish public schools taken over by the state and reopened as a charter school. Dwayne Paulin, who, like Torregano, went from playing in John Mac’s band to directing it, found the transplant charter operators out of touch with its culture (a common refrain from educators citywide). With the building deteriorating and enrollment and test scores lagging, John Mac closed in 2014. By this time, the neighborhood around the school was gentrifying. After a $35 million renovation, the facility reopened in 2018 as an elementary/middle school, with a student body split roughly down the middle between Black and white students. 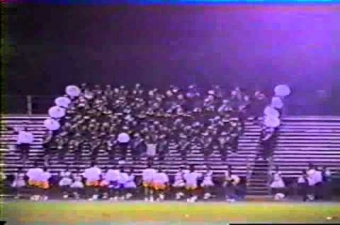 This video opens with a behind-the-scenes look at the John Mcdonogh band getting hyped before a football game in 1995.

This video opens with a behind-the-scenes look at the John Mcdonogh band getting hyped before a football game in 1995. 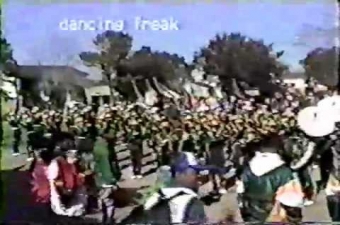 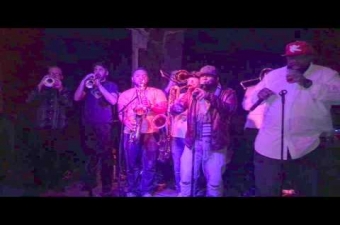 Ricky B performs his version of "Let's Go Gitt’em” at 3:25. He originally recorded it with members of the John McDonogh High School band.

Ricky B performs his version of "Let's Go Gitt’em” at 3:25. He originally recorded it with members of the John McDonogh High School band. 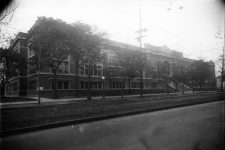 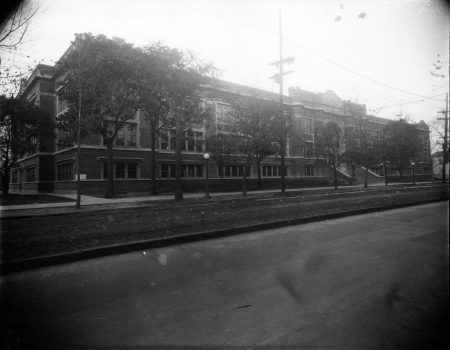 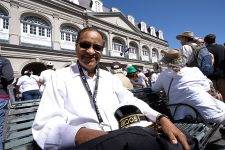 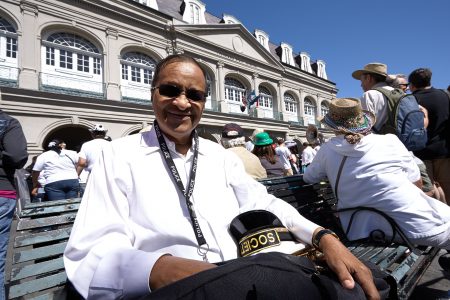 Reedman Joe Torregano helped desegregate the John Mac band as a student in the late 60s, and served as band director in the late 80s and early 90s.
Courtesy of Creative Commons. Photo by Derek Bridges. 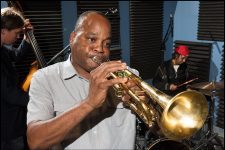 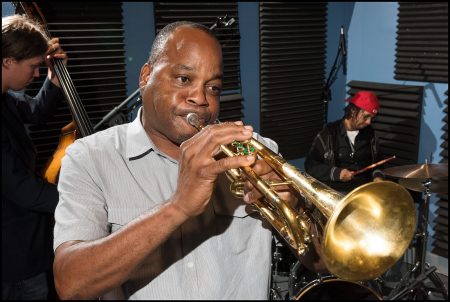 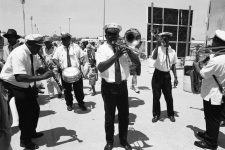 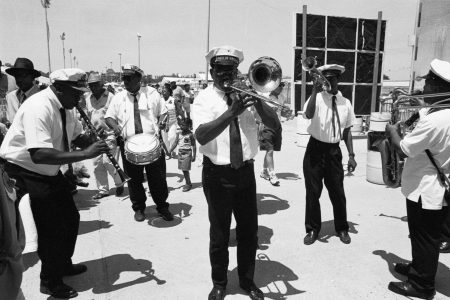 The Paulin Brothers Brass Band in 2001. Dwayne Paulin, on trombone, was the band director at John Mac after Hurricane Katrina.
Courtesy of Creative Commons. Photo by Derek Bridges. 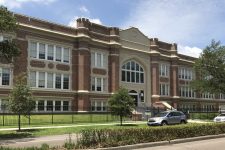 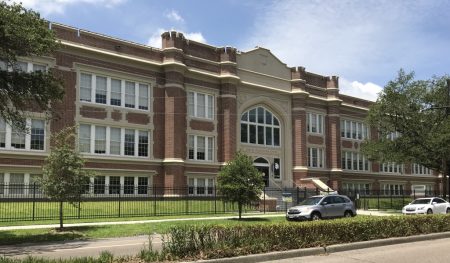