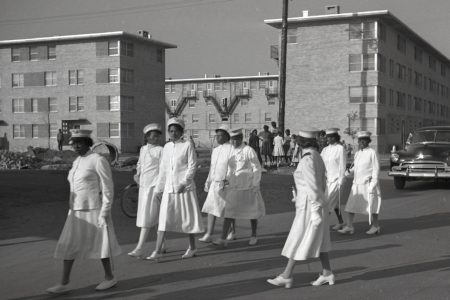 For decades before Hurricane Katrina in 2005, public housing was a major feature of New Orleans’ cityscape and home to up to ten percent of its residents, including some of its finest musicians. These apartment complexes were vital sites of cultural practice, where generations of Black Masking Indians sewed suits and social aid and pleasure club members organized second lines. Performances in their courtyards fostered the growth of modern brass bands and bounce—the dominant innovations in New Orleans music since the 1980s. In the 1990s and 2000s, artists and record labels rooted in the city’s public housing changed hip hop across the country.

Facing a housing shortage in the 1930s, New Orleans became the first city in America to tap federal funds to build public housing. In 1941 and 1942, the Housing Authority of New Orleans (HANO) opened six segregated apartment complexes, each with hundreds of units: the Magnolia, Calliope, Lafitte, and St. Bernard for Black tenants, and the St. Thomas and Iberville for white tenants (their names derived from bordering streets). In some cases the new buildings replaced racially mixed residential areas, imposing a strict color line on them.

These complexes affected the cultural life of the city even before they were populated. When Frank Painia had to move his barbershop from the footprint of the Magnolia in 1939, he opened a new business across the street from it called the Dew Drop Inn, which included a lunch counter and barroom catering to construction workers on the project. By 1945 he expanded it into a nightclub and hotel that quickly became a Chitlin Circuit hub of national renown.

Among the first residents in the Magnolia was nine-year-old Harold Battiste, who would listen to the music coming out of the Dew Drop Inn and become one the city’s great postwar composers, producers, and music teachers. Other future stars moved into public housing in the ensuing years, including the Neville family, Eddie Bo, and brothers Earl and Wilson “Willie Tee” Turbinton.

These early complexes consisted of well-constructed, low-rise brick buildings with porches and balconies overlooking spacious courtyards. Rosa Lee Hawkins, who with her sister Barbara comprised two-thirds of the vocal group the Dixie Cups, recalled, “Barbara and I had our own bedroom, with twin beds, and my mother had a bedroom. The apartments in Calliope boasted a full bathroom with a large tub and space heater, a major improvement for many who moved there from substandard housing conditions.”

This era passed quickly, though. New developments in the 1950s and 60s, like the Desire and the Fischer, were made with inferior designs and materials, and were geographically cut off from job opportunities. After the Civil Rights Act of 1964 forced the city to desegregate, its public housing became nearly all Black, and investment in it diminished further. Still, demand for affordable housing was high—the Desire became one of the largest public housing complexes in the country, home to up to 13,000 people.

Home base for parading groups

The Lafitte’s location at the corner of Orleans and Claiborne Avenues, an established gathering place for Black Masking Indians and a second line route, put it at the heart of Black parading traditions in Downtown New Orleans. The Magnolia’s location at the corner of Washington and LaSalle put it in the middle of the action Uptown. The length of Martin Luther King, Jr. Blvd. running in front of the Calliope and Melpomene developments was a popular parade route as well.

Indians would live and make music across every public housing complex in the city. Art Neville, the eldest Neville brother, recalled these chants echoing through the Calliope. Social aid and pleasure club members lived in every development, too, planning second lines that often rolled on the streets alongside them.

Starting in the 1970s, communities in public housing nurtured the city’s brass band renaissance. The movement began with the Fairview Baptist Church Christian Marching Band, which paraded through the St. Bernard, two blocks from the church in the Seventh Ward. The courtyards of the old brick developments were conducive to brass band performances—mobile, open-air attractions that older folks could enjoy from the porch while young people danced in the grass, no parade permit required. In the Sixth Ward, the Dirty Dozen Brass Band, which paved the way for modern brass bands, evolved from informal Sunday parades that wound their way through the Lafitte.

Generations of musicians followed their lead. James Andrews, who lived next door to the virtuoso singer Johnny Adams in the Lafitte, formed his own brass band and mentored his younger brother Troy, now known as Trombone Shorty. Another Lafitte resident, Lumar Leblanc, founded what became the Soul Rebels. As journalist Katy Reckdahl has written, the concrete interior walls between units meant budding brass band musicians could practice at home with minimal disruptions for their neighbors.

In the 1980s, amid mismanagement by HANO and New Orleans’ economic decline, conditions in public housing deteriorated. In the Calliope, brothers Percy, Corey, and Vyshonn Miller, later known as rappers Master P, C Murder, and Silkk the Shocker, were three of 14 children squeezing into their grandparents’ apartment. They turned to the drug trade to support themselves before Master P founded gangsta rap label No Limit Records and made it a national phenomenon. In No Limit productions, including the 1997 movie “I’m Bout It,” the Calliope served as a stand-in for inner-city neighborhoods across the country struggling with poverty and violence.

New Orleans hip hop reflected the joy and community in public housing, too. Bounce, a dance-oriented subgenre, was built on beats first assembled by Irvin Philips, known as DJ Irv, who grew up in the St. Bernard. It evolved in block parties held in public housing courtyards across the city in the early 90s. DJ Jubilee, the “King of Bounce,” emerged from the St. Thomas, where he led call-and-response chants and shouted out dances that made the crowd an integral part of the performance.

Bounce albums sold on local labels including Cash Money Records, founded by brothers Bryan “Baby” Williams and Ronald “Slim” Williams, who lived in the Magnolia. Around 1996 Cash Money pivoted from bounce, bringing in-house producer Mannie Fresh’s danceable tracks to a group of young rappers it called the Hot Boys, including future megastar Lil Wayne. Members Juvenile and Turk were from the Magnolia, and the fourth, B.G., grew up nearby. They topped the charts with tales of hustling and living the high life—B.G.’s hit “Bling Bling” brought the term for flashy jewelry to the popular lexicon—while songs like “’Nolia Clap” and videos set in the Magnolia, like Juvenile’s “Ha,” kept them grounded in the community they came from.

That community was forced out of its homes in the aftermath of Hurricane Katrina and the levee failures in 2005. Afterwards, sousaphonist Jeffrey Hills’ horn case sat in his unflooded apartment in the Lafitte, but he wasn’t allowed inside to retrieve it. Though some complexes like the Lafitte sustained minimal damage, and the old brick buildings were structurally sound, HANO barred all residents in its largest complexes from returning home.

In 2007, in keeping with the wishes of the U.S. Department of Housing and Urban Development, the city chose to bulldoze the complexes. It gradually built new ones with far fewer subsidized units, shifting thousands of former residents to a program offering vouchers for private housing. Objections that this policy would displace Black families from neighborhoods that they’d made into cultural meccas have since been borne out. In 2020 there were roughly 95,000 fewer African Americans living in the city limits than before the flood, with former public housing sites showing some of the greatest losses.

Today, social aid and pleasure club members and Black Masking Indians still regularly parade on their traditional routes, though many of them and their followers now live in farther flung corners of the metro area. The same is true of the To Be Continued Brass Band, one of the preeminent post-Katrina second line groups, multiple members of which hail from the St. Bernard. While they grew up with brass bands and DJs popping up in the courtyards, regulations in the private developments that replaced them prohibit such things.

Nevertheless, the old public housing complexes remain a vital cultural touchstone in the city. In 2022, the rapper Rob49, a first-grader in the Iberville when Katrina approached, shot a video from one of the few of its buildings allowed to stand as part of a mixed-income apartment complex. The setting positioned him on a continuum of New Orleans artists that goes back to the dawn of jazz: the Iberville was built on the footprint of Storyville, the infamous red light district where the likes of Jelly Roll Morton, a hustler with a diamond on a front tooth, performed at the turn of the 20th century. 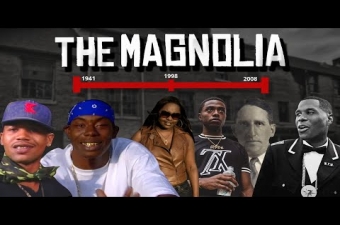 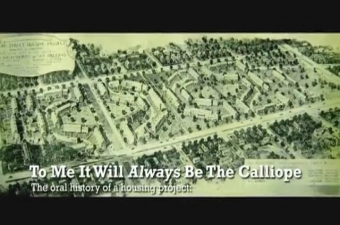 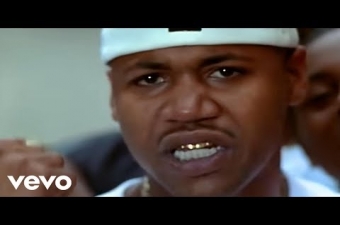 The video for Juvenile's hit "Ha" showed the Magnolia in 1998, putting it on the map for hip hop fans across the country.

The video for Juvenile's hit "Ha" showed the Magnolia in 1998, putting it on the map for hip hop fans across the country. 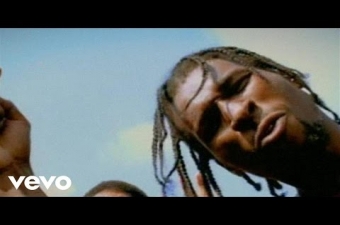 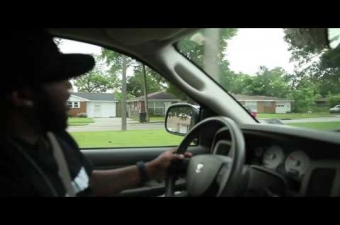 In 2015 bounce hero Ricky B took this short tour through the redeveloped site of the St. Bernard, where he grew up.

In 2015 bounce hero Ricky B took this short tour through the redeveloped site of the St. Bernard, where he grew up. 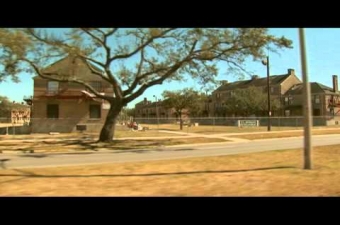 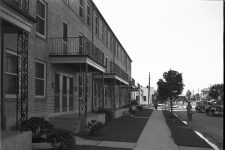 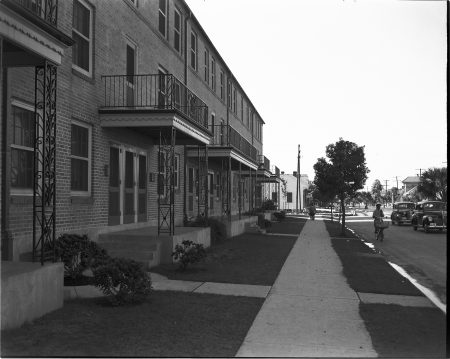 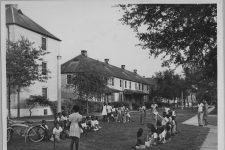 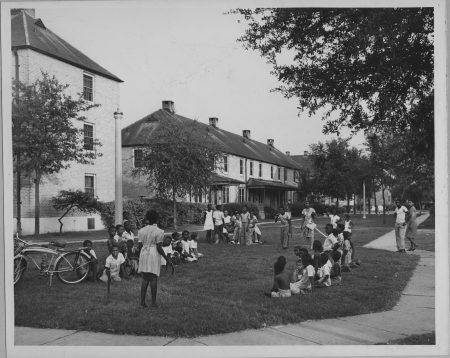 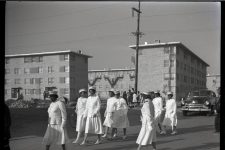 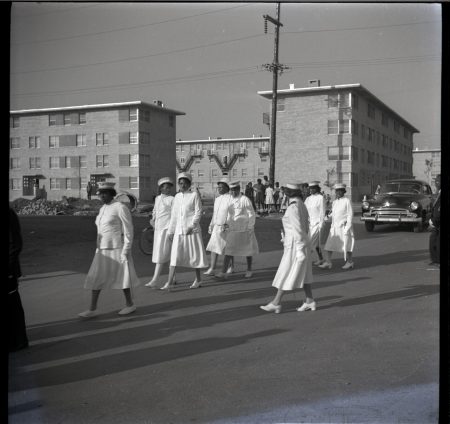 Members of what appears to be the Daughters of Love Divine parading past the Calliope public housing development ca. 1954.
Courtesy of The John Bernard Photographic Archive at The Historic New Orleans Collection. Photo compiled by John Bernard. 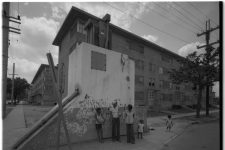 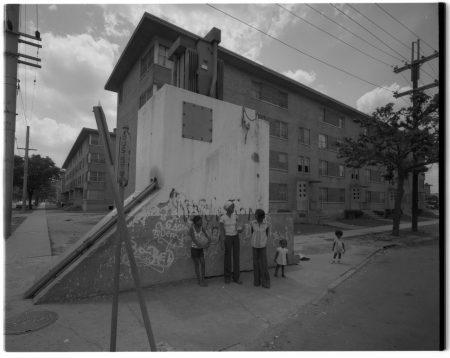 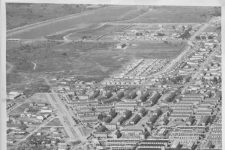 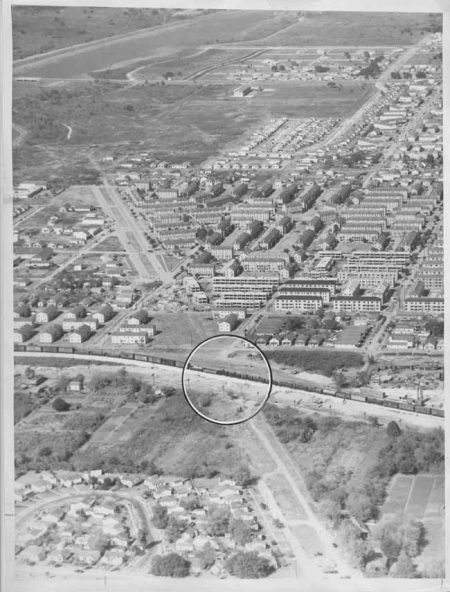 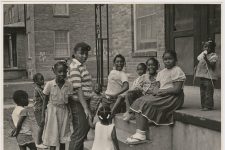 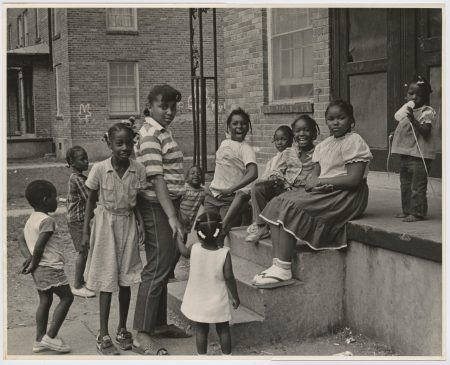 Unidentified children on the porch of an apartment in one of New Orleans' brick public housing developments ca. 1985.
Courtesy of the Historic New Orleans Collection. Photo by Harold Baquet. 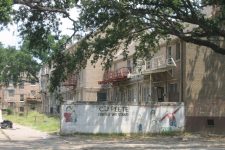 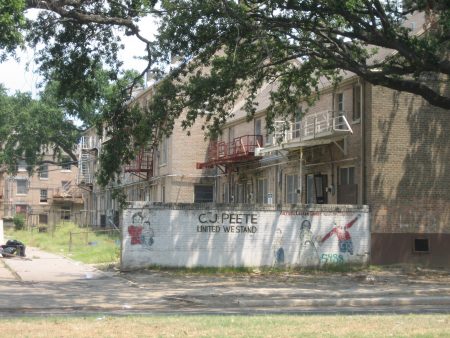 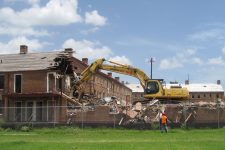 “A History of New Orleans Public Housing, Through No Limit and Cash Money Music Videos" by Brentin Mock, CityLab, August 28, 2015
Further reading on artists from New Orleans projects from CityLab
"10 Years After Katrina, New Orleans Public Housing Still in Limbo," by Katy Reckdahl, Next City, June 12, 2015
Further reading from Next City
If Those Bricks Could Talk by Rachel Breunlin
Buy the book and short film: a brief, rich account of the Lafitte
"Black Women in Pubilc Housing: A Movement Without Marches" by Shana M. griffin for Paper Monuments
Further reading on the politics of public housing in New Orleans
Loading...